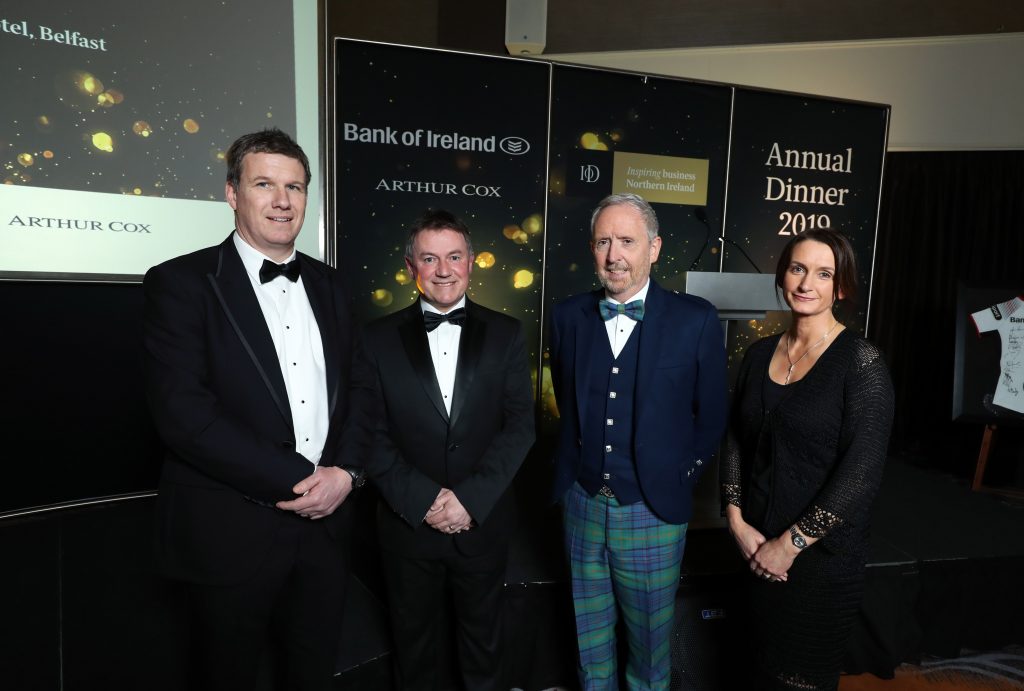 Politicians risk allowing Northern Ireland to “sleep walk into a no deal Brexit”, by running down the clock on negotiations, the Chairman of the Institute of Directors in the region has said.

Speaking at the organisation’s Annual Dinner, Gordon Milligan said Westminster MPs had shown a “dereliction of duty” by failing to find agreement with just 50 days remaining until the UK is due to leave the European Union.

The event, sponsored by Bank of Ireland and leading law firm Arthur Cox, was attended by more than 400 business leaders at Crowne Plaza Hotel, Belfast.

During his address, Gordon said:

“If we tumble over the cliff edge without a parachute, a no-deal Brexit is about a lot more than trade. It would see many legal obligations and definitions lapse immediately while also throwing in doubt the status of EU citizens in UK and UK citizens in EU.

“A no deal Brexit has the potential to severely impact people’s lives and would represent a serious dereliction of duty.

“We must end the Brexit brinkmanship and immediately find a way to secure a comprehensive future relationship with the EU.

“It will be unforgivable if the politicians in Westminster unleash the havoc that results in us sleep walking into a no deal Brexit by playing down the clock like a game of countdown.”

Gordon, who took up the post of IoD NI Chairman in March last year, also used the speech to call on renewed efforts to restore the Northern Ireland Executive.

“If the aim of government is to mothball Stormont, it has been successful.

“It has been well publicised that the political vacuum has resulted in a logjam of more than £2 billion of infrastructure projects.

“For those of us in the business community, focused on creating jobs and wealth for the good of everyone, we are just getting on with the task at hand.”

Permanent secretaries of Stormont-based departments have been granted powers to take ministerial decisions, but this is only a temporary arrangement.

“Countless projects including the North South Interconnector and the new Belfast Transport Hub remain in limbo.

“A long-term solution must be found to allow these economically significant projects to progress, and fast.

“In the meantime, business leaders will continue to roll up their sleeves and get on with the job.”

During his 15 years leading Dyson, Martin, who has also held senior positions at globally recognised firms such as Mars, Duracell and Toshiba, helped the company reach revenue of £1 billion for the first time.

“Bank of Ireland is proud to sponsor this prestigious evening with IoD members and to continue to support Northern Ireland businesses.”