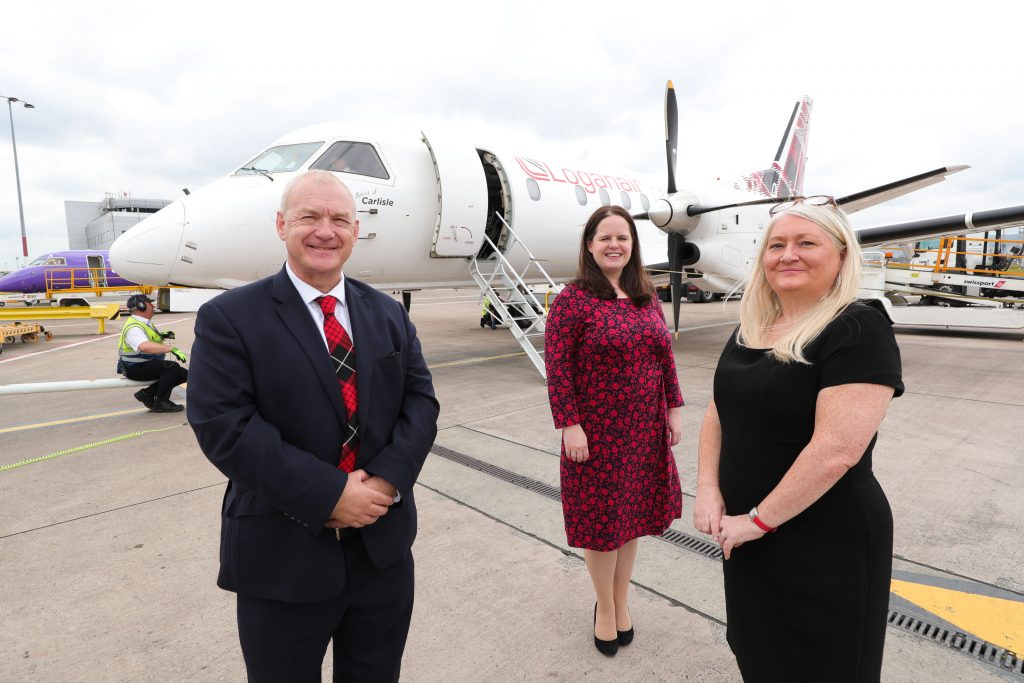 Carlisle Lake District Airport has made history after launching commercial flights for the first time in more than 25 years this morning.

The Stobart Group-owned and operated airport has teamed-up with Loganair to offer routes to and from George Best Belfast City Airport, London Southend Airport and Dublin, opening Cumbria and the Lake District region to the South East of England, Northern Ireland and The Republic of Ireland.

“We’re thrilled to welcome both a new airline and a new route to the airport today with the arrival of Loganair and its connection to Carlisle Lake District Airport.

“Whilst we look forward to welcoming visitors from Carlisle, the Lake District and the Borderlands and showcasing the best that Belfast and Northern Ireland has to offer, this service establishes direct connectivity to North West England which is great news for business and leisure passengers locally.

“Last year Belfast City Airport announced a £15m investment aimed at enhancing the passenger experience which has so far resulted in a refurbished Departure Lounge with a greater range of retail and food and beverage products, and an upgraded Central Search area with security processing times averaging just six minutes.

“This continued investment and excellent customer experience ensures that passengers choose Belfast City Airport time and time again, so we are extremely proud to welcome new visitors to the region through our partners at Loganair and Carlisle Lake District Airport.”

The Loganair fares to and from Belfast City Airport starting from £39.99.

“We are made up to see this amazing project launch today. Not only is this airport a significant new part of the Northern Powerhouse’s transport infrastructure – it is also a shining beacon of confidence and pride for Cumbria, Carlisle, the wider Lake District region and the Borderlands.

“I would also like to pay tribute to our passionate and amazing workers and thank all of those many individuals, organizations and businesses – including our partner Local Authorities and the Cumbria LEP – who have held our hands through this long journey. Thank you.”

Carlisle Lake District Airport, which once served as an RAF airfield, was transformed thanks to a new and modern terminal, its own Borderlands Café and new runways and taxiways.

Amongst other top attractions and business destinations, Carlisle Lake District Airport is situated next to two UNESCO World Heritage Sites – the Lake District National Park and Hadrian’s Wall, the former frontier of the Roman Empire in the UK.

The region’s businesses, including BAE Systems at Barrow-in-Furness and Sellafield, will also benefit from quick, easy and affordable flights.

Some of Cumbria’s best-known producers, such as The Lakes Distillery and Grasmere Gingerbread, are displaying at the airport as part of a celebration of the region today.