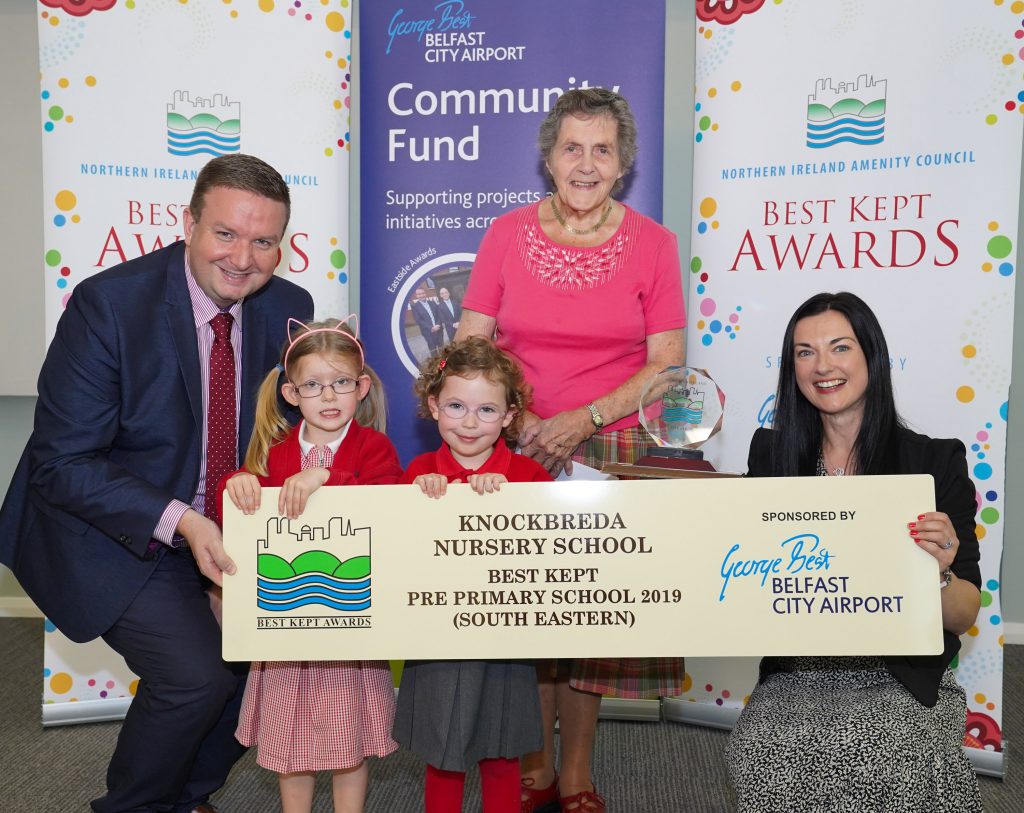 Knockbreda Nursery School, based in South-East Belfast, has been named the ‘Best of the Best’ at the Best Kept School Awards in association with George Best Belfast City Airport.

In an unprecedented move, the nursery school took home a hattrick of awards at a ceremony held at Stranmillis College on 18th June.

The nursery was crowned the winners of the Pre-Primary category for the South Eastern area, took home the Welcome Award, designed to honor schools that have not taken part in the awards before, and finished top of the table – all in its first year of entering.

Knockbreda Nursery school faced stiff competition from 100 schools across Northern Ireland. It was praised for its dedication to ensuring that outdoor learning is at the core of its school curriculum and that its pupils are aware of their role in looking after the environment.

In addition to an allocated clothing bank, to promote reusing unwanted fabrics, Knockbreda installed a ‘Reco Box’ which provides the children with the chance to learn outdoors within the confines of a dry and comfortable environment and encourages each child to take part in ‘Forest School’ play sessions.

“The standard of applications continues to rise each year, with a notable amount of schools being placed that have never entered the competition before. Our judges had a tough time choosing the winner!

“Knockbreda Nursery School impressed the judges with their integrated approach to being sustainable, with an eco-council involving children of all ages. The council came up with the idea of installing bird cake feeders, helped support Waste Week, and regularly liaises with external groups to continuously improve the positive impact the school has on the wider community.

“The Best Kept School Awards is a great chance for schools to demonstrate their commitment to the environment and sustainability, equip their pupils with practical skills for the future and show Northern Ireland the tremendous work that happens behind the scenes every day.”

Stephen Patton, CR and HR Manager at Belfast City Airport, presented Knockbreda Nursery School with its prize at a ceremonious event. He commented:

“It was fantastic to see over 120 representatives from local schools and education boards attending the Best Kept Awards today. Congratulations to Knockbreda Nursery School and each school that won in its category.

“Belfast City Airport is proud to support the Best Kept Awards for the third year. It plays an important part of our Corporate Responsibility programme, which has helped support over 150 different community groups with nearly half a million pounds.”

The Best Kept School Awards is part of the wider Northern Ireland Best Kept Awards initiative, with the Best Kept Health and Social Care Facility Awards will taking place in September and the Best Kept Towns and Villages announced in October.