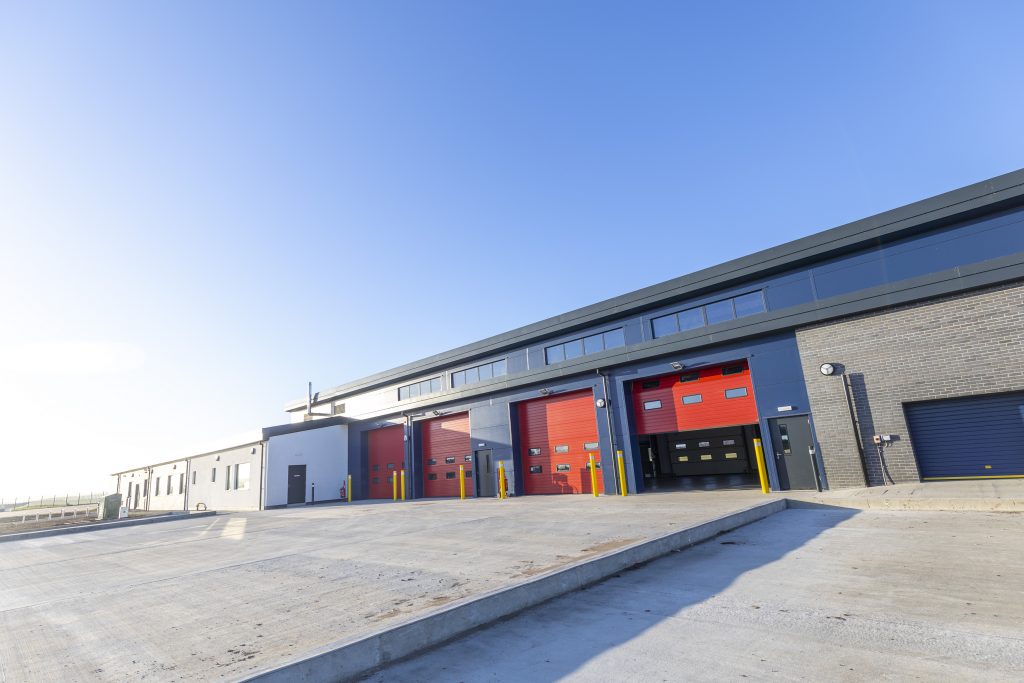 The Defence Infrastructure Organisation (DIO) has completed construction of the new Crash, Fire and Rescue building at RAF Lossiemouth, part of a wider upgrade programme at the Moray station.

DIO awarded the contract to Henry Brothers to construct a new facility for RAF Lossiemouth’s professional in-house firefighters and demolish the existing Crash, Fire and Rescue building, for a total cost of £10.7m.

The new building allows firefighters to reach any part of the airfield in under two minutes. It needed to be robust due to its location close to the busy, operational airfield and provides space for state-of-the-art new firefighting vehicles and supporting training accommodation.

The Lossiemouth Development Programme (LDP) will result in significant upgrades to the RAF Main Operating Base, including providing all necessary facilities for both an additional Typhoon squadron and the new P8A Poseidon. RAF Lossiemouth now has 4 squadrons of Typhoon, a fleet of nine P-8A Maritime Patrol Aircraft and will also be home to the RAF’s new E-7 Wedgetail surveillance aircraft.

Construction of the new Crash, Fire and Rescue building started in August 2021 and is one of many improvements being made at RAF Lossiemouth under the LDP, future-proofing the Moray station for years to come.

The site has already benefitted from early completion of the resurfaced runways, installation of advanced communications and improved drainage among other enhancements to its operating capability.

Through the LDP, DIO will also provide upgraded facilities for IX (Bomber) Squadron later this year and over 300 new en-suite single living accommodation rooms for all ranks in 2023. Over the next few years the LDP, DIO and the RAF plan to construct new in-flight catering facilities and a state-of-the-art Air Traffic Control Tower.

“The developments at RAF Lossiemouth are an example of the great work that is done to improve our infrastructure through investment, to better support our Service Personnel and armed forces capability in Scotland.

“The new Crash, Fire and Rescue building is a testament to our close working relationship with our RAF colleagues and contractors, enabling us to provide a building that meets their needs and maintain high standards of operational safety.”

“The new Lossiemouth Crash, Fire and Rescue station is a fantastic new facility; a definite improvement on our previous old and tired building. My team are settling in and looking forward to working operationally from the new site which all personnel are delighted with.

“This has been an exciting project to be involved in, one which has been in the planning stage for many, many years and has only been a dream for all previous Fire Station Managers and Firefighters.

“We look forward to welcoming Lossiemouth personnel to the new fire Station for various training events or anyone who just wishes to view our new facility.”

“We are very pleased to be handing over this new Crash, Fire, and Rescue building, modernising the infrastructure and facilities on the RAF Lossiemouth site.

“Henry Brothers has extensive experience working in the defence and blue light sectors, and this project perfectly combined that expertise to create a first-class facility that is fitting for the day-to-day operations and training of the team onsite.

“We are thrilled to have played such an important role in upgrading RAF Lossiemouth’s site, continuing our close relationship with the Defence Infrastructure Organisation and further expanding our portfolio of efficient and advanced builds.”

Now the new facility is in use the team will turn their attention to the demolition of the previous facility, dating back to the 1960s, which is no longer fit for purpose.